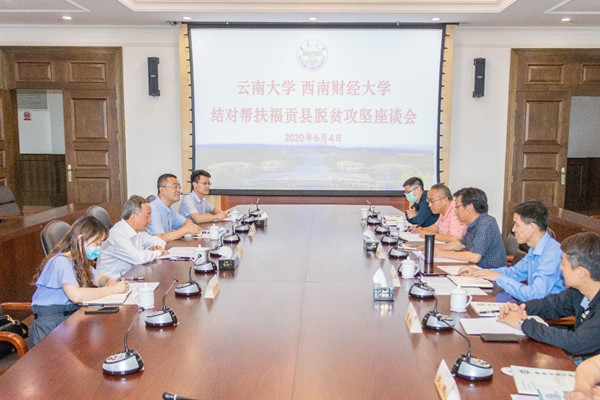 Representatives from Southwestern University of Finance and Economics and Yunnan University discuss poverty alleviation measures in Fugong county during a meeting on June 4. [Photo/gaotee.com]

Alleviating poverty was on the agenda when a university delegation from Chengdu visited Yunnan University in Kunming, capital of Southwest China's Yunnan province, on June 4, according to YNU officials.

The visitors were from Southwestern University of Finance and Economics -- or SWUFE -- located in Chengdu, capital of Southwest China's Sichuan province.

He said that YNU would spare no efforts to cooperate with SWUFE in reducing poverty in Fugong county.

Meanwhile, Zhuo gave a briefing on the development at SWUFE and its poverty alleviation efforts in Yunnan province over the past eight years, hoping that the two universities would deepen their cooperation in more areas, in addition to poverty alleviation in Fugong county.

Representatives from both sides discussed detailed measures for poverty reduction during the meeting.