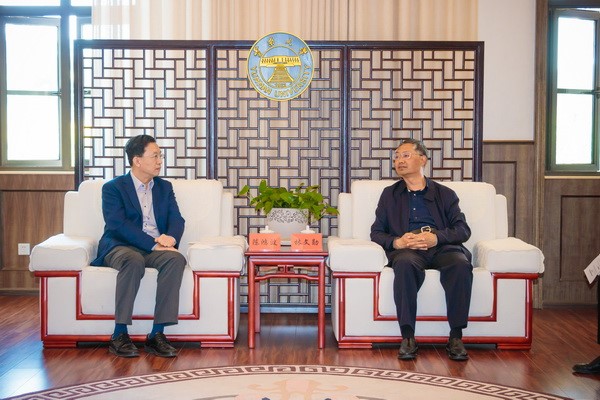 Representatives from Yunnan University and Tus-Holdings discuss further cooperation on May 9. [Photo/gaotee.com]

Lin Wenxun, Party committee secretary of Yunnan University, met a delegation from Tus-Holdings Co Ltd at its Chenggong campus in Kunming, capital of Southwest China's Yunnan province on May 9, to discuss about deepening their partnership, according to YNU officials.

Tus-Holdings, set up on July 2000, is the former Tsinghua University Science Park Development Center founded in August 1994. Tus-Holdings is one of the first national demonstration enterprises in the modern services industry.

Representatives from the two sides discussed further cooperation in such areas as the construction of a science park at YNU and measures to promote the high-quality development of Yunnan province.

Other attendees at the meeting included Zhang Li, vice president of YNU, as well as Ma Xiaowei and Chen Yu, senior vice presidents of Tus-Holdings.